Start a Wiki
The staff 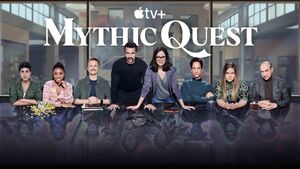 Mythic Quest: Raven's Banquet is a documentary which invites you into the world of premium video game production. As you meet the team behind the biggest multiplayer video game of all time, you'll come to realise their workplace has a lot in common with your own. Despite the fact that their job focuses on on building worlds, shaping heroes, and forming legends, you'll learn that the most hard-fought battles don't occur in the game. They happen in the office.

Here are some names and faces you need to know to enter the world of Mythic Quest: Raven's Banquet. But there are plenty more!

We're a community run and maintained by people just like you! Created by fans, for fans, the Mythic Quest Wiki is dedicated to creating a comprehensive and informative resource about all things having to do with the Apple TV+ comedy, Mythic Quest: Raven's Banquet.

Retrieved from "https://mythic-quest.fandom.com/wiki/Mythic_Quest_Wiki?oldid=897"
Community content is available under CC-BY-SA unless otherwise noted.